I was recently back somewhere I had had a few tutorials as an undergraduate.

As I was approaching, I began to feel anxious and sweaty and sort of guilty, as though I was about to remember disgracing  myself drunkenly at some sort of bop.

I remembered a “funny” story that I had used to tell from tutorials there, that I had forgotten over the years.

In this story, I turn up five minutes early, and the other two students in the tutorial aren’t there. The tutor shuts the door, which is weird because two other students are about to arrive. He says something to me. I’ve told this “funny” story too many times now to be sure if what I remember is what happened or what I’ve said, or some hybrid of the two. It is something how I look. Complimentary, quite specific. More than “you look nice today” less than “nice tits love.” I ask to talk about my essay. One of the other students arrives.

So far, so nothing. An awkward conversation between an awkward undergraduate and an awkward professor.

But as I was walking around this place, I was remembering other things. A year later I’d helped out with a conference. The tutor had asked me to do some photocopying, and then followed me to the copy room. It had been cramped. I’d felt awkward and self-conscious. Someone else had walked in.

After the conference, I mentioned to the other helpers that it was nice of him to have send us a card and a book voucher. None of the others had received anything.

I don’t know why this made me feel so bad, but I did. I was walking around all day anxious and sweaty afraid that I was going to run into this guy. Was it because it was an awkward situation and I had behaved awkwardly? Nothing happened. I mean, this wasn’t exactly Weinstein territory.

And now I’m left with doubt. I know what I would say to a friend if they told me the story, but I was in this situation. Nothing was implicitly offered or implicitly withdrawn. There was an uncomfortable power dynamic. A few awkward things that made me feel self-conscious happened, but people are awkward, and that’s life.

Even now, looking back, I just feel embarrassed like I was either socially awkward, or a deluded narcissist to think that someone much more senior would even bother to try it on with me. That no matter how unwelcome it would have been, I must be pretty up myself to imagine anyone would imagine something like that about me.

I can’t parse it. And I think that’s what’s strange about the past. So many of life’s odd encounters come to nothing. We second-guess ourselves. We doubt.

We know what’s right and wrong, but so many real-life scenarios are ambiguous and hard to read. It’s absolutely 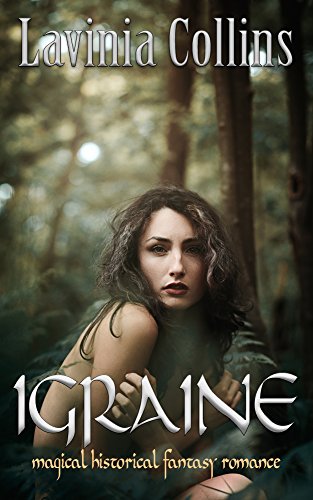 The time is here! IGRAINE is now available in its omnibus version! ** Just 99p for a short time **
These books tell the never-before-told story of King Arthur’s mother, the conflict over the future king’s destiny between the queen and Merlin, and the struggle of a post-Roman Britain to mix past with present, Christian with pagan, and magic with politics. Igraine is no passive by-stander at court but a powerful political player, a wise and influential queen who reflects the strength and tenacity of the women of ancient Britain.

Wow, I’m behind on these! This was originally posted on Chapter and Verse Reviews.

This book was recommended to me by my mother, and like a lot of books my mother recommends, it contains quite a lot of sex (which she claimed to have no recollection of), including a particularly striking passage in which one of the characters compares a particular act to being sucked by a heifer. When I showed this passage to my current companion their only question was, “What is a heifer?”

So why I am recommending this heifer book? I didn’t love it. Isn’t it weird to recommend books you don’t love? Maybe, but I’m still thinking about it. It was a rather odd book, really. It centres on this character, Maud, a scientist working in pharmaceutical research, her relationship with her partner and her child and, most of all, other people’s assessment of her, and of her coldness and apparent self-interest.

A lot of the blurb extols what an incredible character Maud is, but what I found most interesting was the way that the other characters seemed not to be able to fathom her, and what that says about what both the author and society at large consider strange, unacceptable, mysterious, unusual, and incompatible about Maud’s personal qualities and womanhood and/or femininity.

You’ll love this book if you like:
– Unusual family dynamics
– Lots of detail about boats
– Heifers

You might want to avoid this book if you dislike:
– Tattoos
– Boats (there really is a lot of detail about boats) 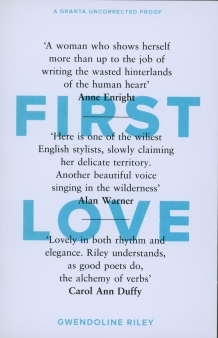 First Love is a snapshot into Neve’s marriage via a flashback into her first love. It’s a simple concept, and the style itself is not wordy or flowery, and yet it communicates something real and complex. Riley has a talent for writing speech that reads as real, and for communicating relationships clearly but not explicitly.

First Love is one of the best novels I have ever read. I do not want to give too much away about it, but it was a true and painful and subtle and beautiful picture of a relationship that was told with a delicacy that it’s rare to see in literary fiction now.

Go out and read it immediately.

You’ll love this book if:
– You like literary fiction
– You are interested in what makes people tick

So I want to preface this by saying that I love Jennifer Lawrence and everything she does*  so I was ready to love this movie. I love spies! I love dubious Russian accents! I love spurious reasons to introduce sexual content!

But, readers, I did *not* love this film.

Be ye warned, there are some spoilers ahead.

I could see how the story of an injured ballerina (could anything be more Russian??) turned sexxxy spy could offer something of an empowerment narrative, or at least one that could offer a critique of the world around us, but if that was what I was hoping for, ladies and gentlemen, sadly it was not what I was given.

This is awkward because I always wear exactly this suit to the pool.

felt like not yet twenty minutes in to the movie. All of the men with whom she is involved are either violent to her, or very age-inappropriate, or both.

There is one moment in which she takes off all of her clothes in front of a room of people as a power-play, and on its own this moment had a point to make about assault and desire (namely that they have no relation to one another – it’s all about power), but there was something deeply unpleasant about watching a film in which she was stripped naked (or nearly naked) for the rapes/attempted rapes three times, but the one time her character engages in consensual sex she does so not only wearing a vest but also (inexplicably, to me) her underpants.

Instead of offering a critique on the way that young women are used as sexual bait, or developing on the glimmer of exploration of the power-dynamic inherent in coercion, it felt like these assaults and violations, and the tortures that followed, were offered instead to us for consumption. And we weren’t just consuming sex, we were consuming the “evilness” of modern Russia, which needed to be infiltrated and “fixed” by America. One character made a throwaway comment of America being maybe not all it’s hammed up to be, but the logic of the film’s narrative says otherwise.

Essentially, it was like an episode of Archer with no jokes: unconvincing Russian accents, double agents everywhere, misogyny and torture (here, without irony) and (despite a 2017 timestamp in a piece of film) a nebulous time period that blends cold war with now.

Sad to say, would not recommend.

*(even if she did refuse to consider that there were some troubling reasons that she felt sexy and powerful in a naked dress and men feel sexy and powerful in nice warm coats, because you do not have to be a “perfect feminist” to be allowed to decide to be cold to feel sexy within the parameters of this broken world)

(1) Writing in bed in pyjamas until 2pm, being a sweaty and unwashed person

Not getting up oh no

(4) Late-night writing when I have early morning commitments

(5) Pre-emptively apologising for myself when friends buy my book

(6) Writing instead of doing my day job

(9) Refusing to read my books aloud to friends/family

It’s been a manic year for me, to be honest. I graduated from my PhD (hooray), moved to another country (sort of, don’t @me friends who know where) and began an exciting new adventure.

In the midst of that another exciting thing happened which is my Igraine series came out! And like all of literature before, I have rudely and unfairly ignored her because of the mania going on in my personal life, so without further ado here she is!

You can already get all three parts, and watch this space because before too long the lovely Book Folks will be putting together the combined version with the paperback.

n this series, I wanted to explore a darker and more troubled and troubling relationship still! Not just between Uther and Igraine, though here I had an opportunity to see how desire and violence intertwise, but also between ancient Britain and its Roman past. In a story that roots my original Arthurian series in it’s pre-Arthurian past, I’ve also thought about something that I wish I saw more in medieval texts – the shadow of the Roman past.

We know this is something people thought about in the Middle Ages, and I wanted to think about all the ways the past intertwines with the present and

the way different pasts are negotiated in this series. I hope you enjoy it!

I leave you with the Exeter Book ruin riddle: 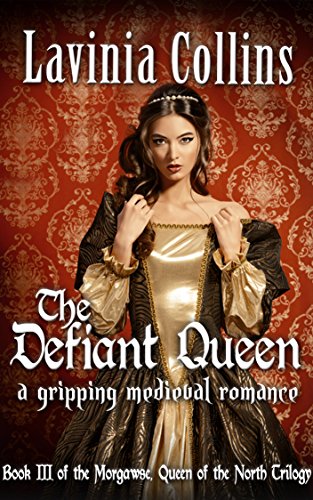 Grab it while you can – #99p bargain THE DEFIANT QUEEN for your kindle!

Grab it here!
The King of Britain is dead, without a male heir. The politics of her country never mattered much to Igraine, until now, when they threaten to rob her of her home, Tintagel castle.

When the witch Merlin tells her destiny will make her queen, a defiant Igraine refuses an offer of marriage from Uther, a rough soldier and unlikely pretender for the throne.

But destiny cannot be avoided and the harder she fights it, the more brutal it will be when it comes.

THE CORNISH PRINCESS is the first book in the last series by Lavinia Collins based on women in Arthurian legend. It is followed by Book II, MERLIN’S CURSE and Book III, MOTHER OF THE KING. Also be sure to check out Lavinia Collins’ chronicles of Guinevere, Morgan and Morgawse, all available on Kindle and in paperback.

The full omnibus version of Morgawse is just 99p on Kindle!

Get your copy here!

MORGAWSE features all three books in the trilogy, previously published in single volumes on Kindle, as part of Lavinia Collins’ fantasy chronicles exploring the lives of Arthurian women. Look out for GUINEVERE and MORGAN.

The three books collated here have been described as “stunning”, “gripping”, “simply beautiful” and “enthralling”. Try this volume today and see what all the fuss is about!